It' so nice to have ones own photographer at hand... today pics with and without flash. Pics taken in daylight at 14.00 pm - those who live in northern countries understand the importance of (and appreciate) this little piece of info. :P Some are done using flash. The eyes are unevenly done, discovered it only after the pics were taken. 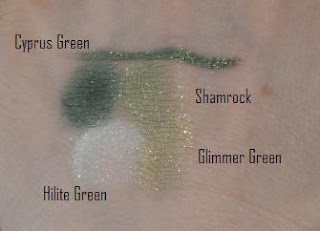 Colors used:
Cyprus  Green all over lid and wet as liner
Shamrock in the crease and above
Glimmer Green in inner corners
Hilite Green used for blending upwards.
Swatches done dry, with flash.
The browbone is later blended using the EDM's Intensive Fair concealer which is also the foundi.
EDM's Pearl Sunlight under the eyes as usual. 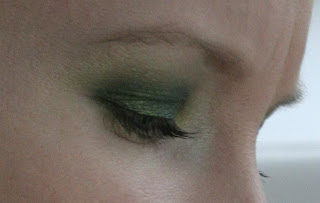 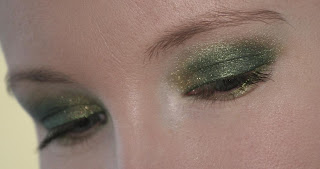 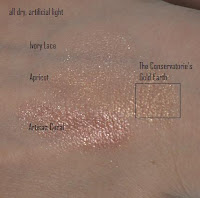 Today something simple and elegant and metallic.

Artisan Coral all over lid
Apricot all around it in the crease and Ivory Lace on the browbone.
All colors applied dry, I think I also forgot to use primer.

Very subtle and elegant look, has quote high sheen and colors themselves do not show up on the photos. Artisan Coral and Apricot are both similar in texture and sheen and therefore go well together. Picture is taken 3 hrs after application in fading daylight.

Apricot looks a bit like Conservatorie's Gold Earth but the latter is pinkish while Apricot is more yellow-orange.
Angel Wings as blush, EDM's Intensive Fair concealer as foundi and EDM's Pearl Sunlight under the eyes.

Totally forgot the eyeliner... Simply Naturals' Sandlewood would have made it better. This one needs a stronger color - in the crease and outer corners. Otherwise I just look tired on the photos.
No comments: 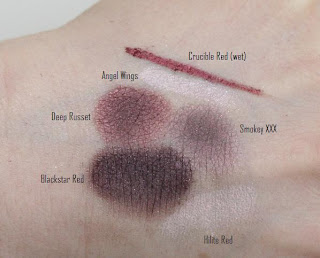 This look  tries to copy the look Anastasia has on her blog And they have a plan... but mine is a bit more pinkish and uneven. No primer is used here. And the Ecotools eyeshadow brush really sucks with Blackstar Red - instead of applying it it seems to rub it off instead. What can I say - the less light the better it looks. A lot more sparkle in artificial light - these pics are all taken in daylight. 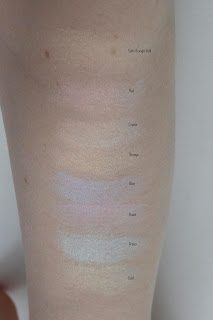 These can be very useful when blending but I'd never use them for highlighting the brow bone unless I would be working in a circus. The only exception would probably be the Satin Orange Gold mica - less aggressive sheen.

They're very sheer and adhere well. A tiny piece advice - try them over a dark base! Any darker shade of eyeliner pencil will do ;).

This time no primer and all swatches are foiled.

From top to bottom:

I adore the metallic colors... they stick well and have good coverage. I did not like the 24 Karat Gold much cause it is really way too glittery. 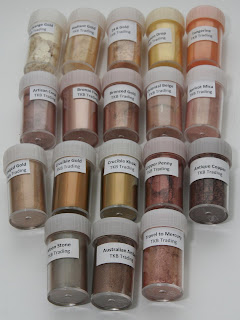 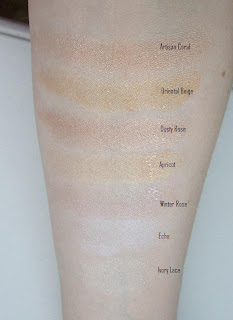 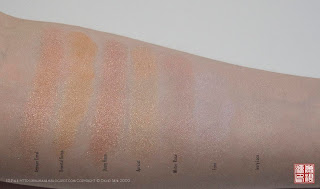 Swatches are done dry over a thin layer of primer. 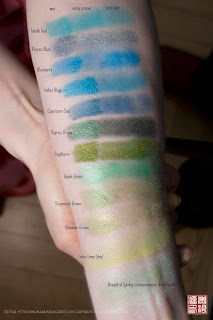 Unfortunately the brush was contaminated and Breath of Spring looks smeared. Capricorn Sea does not look good without primer and does not look good with primer either, on this photo... Lotsa Lime is more like greenish yellow then a green color. The blues look a lot alike, the best one imho is Indian Blue - love the golden green sheen.

And definitely - need to buy a fresh eye makeup base. 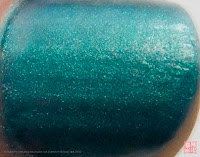 I still do not like it - but it looks a lil' bit better in artificial light - less matte.

Here's the Zodiac set all together: 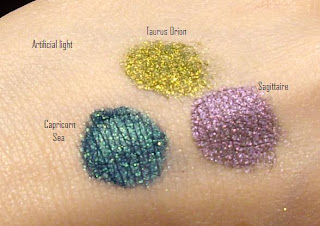 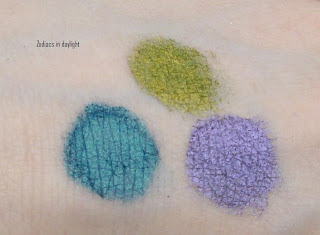 Who wants the Zodiacs? They do not appeal to me... my brushes do not like them and vice versa, they do not adhere well.

It's an overcast day but I hope colors are recognizable.
I was thinking of making only dry swatches but the Sagittarius looks so crappy when applied dry and without primer that I decided to add primed swatches too. Colors from bottom to top (or left to right on the lower picture) are:

My primer has dried out, must buy a new one - totally unblendable!

Light is still crappy today, cant shoot swatches. And must start preparing the dinner too. But here's some pink eyes:

And the light is gone...

This time around I also ordered 4 ounces of the eyeshadow base and a pretty big heap of oxides (all samples) from TKB Trading  - going to try my own mixing. Cant wait to get home and start the repotting and swatching - though I suspect the short winter day may not be long enough for a successful photo session.
Order was shipped via USPS Priority Mail on December 11 and arrived December 23. 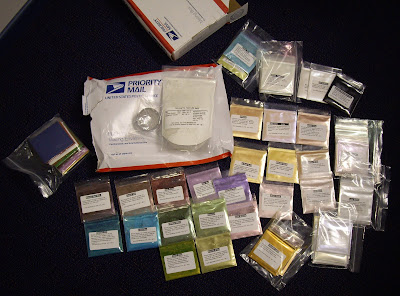 This is now some time later, here's most of them nicely potted - ran out of jars eventually... 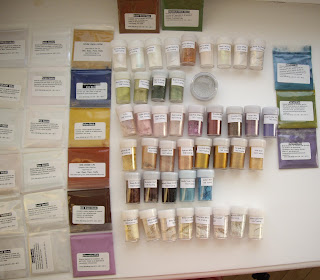 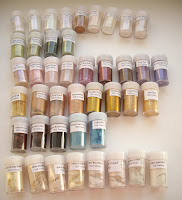 I did not bother with the Sparks! collection - I do not like sparks that much and wont be using them in everyday do's. Mostly for formulating. Too bad no jars were left over for the oxides... I did not consider the Zodiacs to be worthy of potting either.

TKB Trading's Pop! Collection is very bright - yes, but has no good coverage on it's own. I think these micas lack adhesion and coverage. They are high in sheen but when looked at from another angle - the skin shines through. Good if used on top of MAC paint pots etc but not on their own.

Another lesson learned today - blending is a tricky job. Especially when trying to blend the Pop! micas - they disappear...

Colors used: Tangerine+Green Apple mix (50-50) all over lid, Blueberry in the crease, Lemon Drop above the crease and all blended down. Picture taken in artificial light, much brighter irl.

And the same mix (50%Green Apple-50% Tangerine) in daylight, next day. Same color used wet as liner too. Minimum blending - used Conservatorie's 18K Gold to blend upwards from the crease. 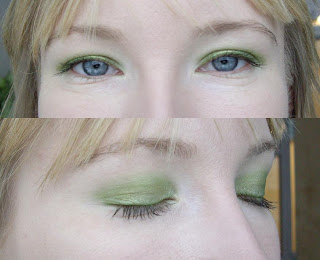 Super Brilliant Mocha is one of Conservatorie's loveliest micas: shiny, sparkly and adheres well. I am a bit displeased with Simply Naturals's Polished Silver, it's not as smooth as I would like and it's particles are too big for my liking. When I ordered I thought of getting silvery sheen  but instead got silver sparkle. TKB's Pisces Blue is not adhering well if used just as plain mica - it falls off. The shine particles are too big - if u want blue with golden sheen, order Ocean Green instead (which I did not but now I know better).

Manhattan's eye makeup base all over lids

EDM's Pearl Sunlight under the eyes

EDM's intensive fair concealer as base 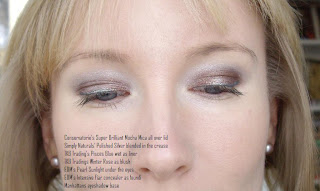 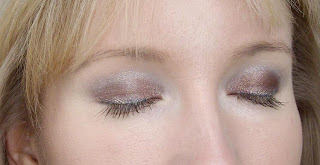 While editing the EOTD's I realized: effect would have been better if I would have used Pisces Blue in the crease as well. Pictures are taken in daylight by the window. Blush is totally invisible.

Here's some pictures taken 7 hrs later: the makeup stayed on quite well except on the chin which was hidden in multiple layers of the shawl.The foundation rubbed off. I think most ladies  living in colder climates have trouble with washing their shawls and coat collars quite often - cause they're covered in foundation.

It was -15 degrees Celcius this morning, quite cold. I wrap myself in my scarf but still the cold gets through - especially the skin around the eyes looks like crap. As I step through the door I look as if suffering from a serious skin condition - red patches under the eyes.

Unfortunately I forgot to take a FOTD but - there's still time tomorrow. Skin suffers a lot right now - needs special heavy creams in the evening (got a tester of Dr. Hauschka's quince cream just for this, the rose cream was already sold out) and careful moisturization, gets flaky otherwise. Oil cleansing method is the way to go right now - no soaps whatsoever allowed. And absolutely no water on the face in the morning! The skin's own sebum is the best thing for skin when it's this cold outside, all cleansing procedures must be kept for the evening.

The cold wave is here to stay until Christmas at least. The good thing is - it's not cloudy! We can actually see the Sun!

PS! I am aware that I do not use the Dr. Hauschka products as they were intended - Hauschka's entire skin care routine is exactly the opposite - the cream should be applied in the morning and no products used when going to bed...
2 comments:

the ferrules, handles and bristles are of different colors but the proportions of the brushes seem to match 100% - are they the same?
3 comments:

Email ThisBlogThis!Share to TwitterShare to FacebookShare to Pinterest
Labels: brushes 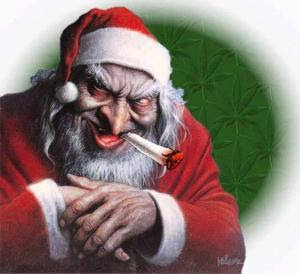 Just a rant: Estonian Ministry of Finance has lowered the tax free margin of imports: all purchases ordered outside EU that are more then 22 euros will now be taxed with VAT (20%). The limit used to be 150 euros. The duty free limit still remains at 150 euros since that is set by the EU common law. Merry Christmas, everyone!
3 comments:

The bruised look - not enough blending. TKB's Grape is dominating the entire look. Did not use any highlighters today and it shows (under the eyes). Heliotrope as blush.